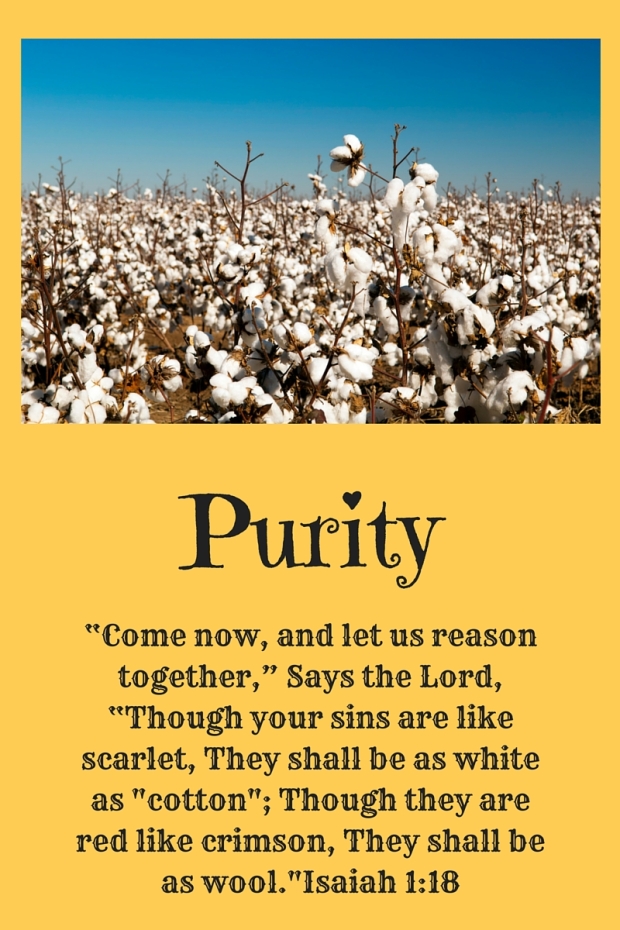 Today is October the 1st. I have signed on to join over a thousand writers, known as 31 Dayers, to write every day in October.

My topic is purity… with a focus on John the Baptist, who happens to be one of my favorite people in the Bible. He was bold, brave, and absolutely sure of His purpose on this earth: Prepare the way of the Lord!

If he was concerned with what anyone thought of him apart from God, his life gives no indication. He was sold out, all in, and his actions testify to the fact that there was a white surrender flag firmly planted on the soil of his ego.

Each believer receives that same call of wild John the Baptist on this opposite side of His coming as we await His return. Now, collectively, we, who are blood bought, are known as the Bride of Christ- a bunch of wretched, con-artist sinners, washed clean and invited to be wild in the John the Baptist sort of way, which is the way we were intended to live… trusting and loving the One.

We are clothed in the rich robes of grace and truth becoming unified as the Bride. I can think of no other word more appropriately fitting for this Bride that awaits seeing her Bridegroom face to face than… PURITY. Purely, following Him, not seeing Him yet believing that “the pure in heart shall see God”…joined forever with her Beloved.

Join me? I would count it an honor. My fears and failures stir gently nudging me not to write, but I’m choosing John the Baptist boldness and fixing my eyes on Jesus, writing because He first loved me.

Lord, when you come we shall be like You for we shall see You as You are. We have this hope and choose to allow You to purify us. We cooperate with You, the One who is our Purity. 1John 3:2,3

Because it is about pain- in the church house.

I’m talking to Bible believers here, primarily (but not only) Protestants, because for the most part in the practice of worship meetings hold the time of teaching from the pulpit in the highest regard. This is especially to those, who preach the Word, who have NOT compromised and may find this as a source of pride.

It’s about the next generation of believers. And you, listen. That is, if you are a rescued, redeemed, washed clean, child of the King.

Look at this. And look closely.

I copied this from Rachel Held Evans blog- named one of the 50 most influential women in Christendom of our day. Her post was called Sunday Superlatives where she picked some different quotes, books, etc… that she considers “super”.

Kathryn Joyce with “By Grace Alone”

“For years, Protestants have assumed they were immune to the abuses perpetrated by celibate Catholic priests. But Tchividjian* believes that Protestant churches, groups, and schools have been worse than Catholics in their response. Mission fields, he says, are “magnets” for would-be molesters; ministries and schools do not understand the dynamics of abuse; and “good ol’ boy” networks routinely cover up victims’ stories to protect their reputations. He fears it is only a matter of time before it all blows up in their faces and threatens the survival of powerful Protestant institutions.”

*Basyle J. Tchividjian is the grandson of Billy Graham, a former district attorney in Florida prosecuting child sex-abuse cases. He is now a law professor at Liberty University and in private practice. He is the founder of GRACE (Godly Response to Abuse in the Christian Environment). Kathryn’s article is worth the read.

Do you understand that THIS is true?  THIS is real stuff. THIS is not made up.  THIS is spoken by a man, who knows from experience. Do you understand good ole boy networks exist IN the church house? And this little woman is about to tell you a thing or two.

Rachel Held Evans- named one of the 50 most influential women in Christendom today (where I copied the above quote)- She gets so much right. She will say what others won’t because most blindly follow leaders simply because they are in a position- Because she will post THIS on her blog. THIS TRUE information about children molested in Protestant churches and ministries and Protestant leaders covering it up. But do you know this: if your kid told her he or she was gay she would affirm them in that. Huh? Yes, huh? Is purity purity or is it not? Go, read her blog. She is pro-gay and much more. She and her following helped influence World Vision’s decision to allow people in same-sex marriages to volunteer and work in their ministry. (They later back peddled on this decision). Rachel blamed “intense financial pressure from evangelicals” for the reversal of that decision.

She is probably right.

Where men or women stand behind pulpits-

And use them as protection-

And build the numbers-

And fill the money bins,

But sweep difficult situations that threaten the building of their own kingdoms under the rug,

As if God had no power- or even worse… as if He and His people don’t matter,

THIS IS WHAT YOU GET:

A platform for the lies of the enemy.

You get boys and girls abused, secrets shuffled under rugs, and big boys and girls confused, distraught, and leaving – or sitting and doubting and numbing and never quite free- thinking that worldly position equals godliness.

You get people practicing all forms of ungodliness and pointing fingers- saying “don’t call me impure because you people allow all forms of ungodliness in your midst and then point at gays, and preach on and on about marriage…You don’t even deal with the sin (sexual included) and greed in your midst… How dare you?”  Clever, huh? Sinners and addicts of all kinds look for loopholes- just like Satan to make it confusing. And in the process keep people in bondage, fear, pride, and unbelief.

The fear of the Lord is the beginning of wisdom. Prov. 1:7

FEAR. and we are right when we are in awe of Him and we should know that if anything is under the rug- It will be revealed. God doesn’t deal with rugs.  He is in the business of thorough housekeeping, unlike many busy mothers- who strive for some order and clean enough.  He is about spick and span-

What we would hide and throw away- what we fear opening-

HE DOESN’T. He will open, uncover,

and cover- powerfully- with His purity.

He didn’t avoid the difficult in a human body walking dusty roads. AND He doesn’t now. He is a mind reader, knows the motives of our hearts– …everything is uncovered and laid bare before the eyes of Him to whom we must give account. Hebrews 4:13

This is why we are to fear Him. He is the real deal. In a world full of fearing all the wrong things- the what- if’s, if -only s, oh -no’s, and dear me s-

He, the Real Deal,  the only proper One to fear.

And this is the only business His children are to be about. No pretending. No lifting the corners of rugs to sweep junk underneath- no trying to patch hard things up with a wave of a Bible verse.

The Word, who became flesh, Jesus, never does that. (Gen.1 and John1)

Big living is meant for you and I- royal living- Jesus living. Cause didn’t He say He gives us His life? Didn’t He say, I am leaving you and sending the power of God to dwell within you? Acts 1:5

Royalty of the heart.

crowned in our hearts with the bold righteousness of Jesus.

NOTHING can take us out of His hand.

Where the arrows fly, but the authority of the crown guards our hearts.

And we turn, reach, grab a hand and point- to Him and Him alone.

The FEAR of the LORD

Hand in hand with Bible teaching, we are in desperate need for the Word to work in the most difficult of situations. We need the Remnant to rise up, and to keep rising up after long times of bending low and listening to the King- letting Him deal with us and be our everything- to rise among the weeds
and be recognizably wheat. (Matthew 13:30)

This is meant to encourage you, Royal Priesthood, to challenge you, to help you pray.

To pray for our leaders. And to be the leader you were meant to be- a Priest or Priestess of the King. A Prince or Princess of the Mighty One of Israel.

The Remnant of Our Generation, The True Believers, The Faithful Witnesses.

And those who are washed clean have an enemy who wants to steal our seed meant to help others throw off those grave clothes and walk in Christ. Do you get that? YOU- have special seed- assigned just for you!

When the the gospel is preached and then tossed in the garbage when a difficult situation arises that threatens the institution- the agenda of man, this is YOUR business. You are NOT a sweeper under the rug spiritual housekeeper. Nor do you allow others to be- because you love,  because we, you and I, have been washed and loved- because we know His power is big enough to handle ANYTHING.  The Gospel is sacred and holy and we must confess it and breathe it, and battle rightly, willing to let others be offended by it no matter what worldly position they might hold.

I submit to you- ask Jesus how to pray for His body, your local body, your leaders, to ask Him to show you how to battle and to repent and get up under His mighty hand and stay there, letting Him lift you up in due time- relying on His power and authority alone.

The Lord bless you with rejecting a form of godliness that denies it’s power. May you not be one who sweeps dirt under the rug because you fear something more than you fear Him. May you be blessed with leaders who battle with you, worshiping in Spirit and in Truth. May you not faint, nor grow weary in doing good because you drink often and deep from the bottomless well of Jesus, our All.

And pray this for me, too.

For I Long to BE In Him Alone Always,

Princess Diana of the Unending Kingdom

To Be Continued, Dear Reader…